Love In The Time Of Shark Attacks 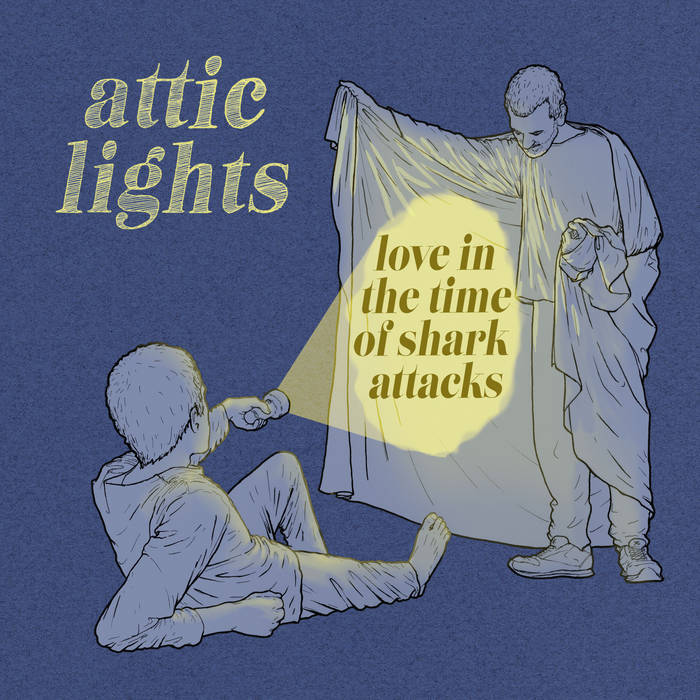 Kev, Colin, Jamie and Noel spend a tremendous amount of time crafting their songs to perfection. With ten years of meticulous pop songcraft behind ATTIC LIGHTS, we now hold in our hands their third album, “Love In The Time Of Shark Attacks”. The band prove that even though time passes for everyone else, they maintain the same pop inspiration, killer melodies and heavenly harmonies that have seen them compared to THE LEMONHEADS, TEENAGE FANCLUB and R.E.M. With the rest of the world turning upside down and getting crazier with each passing day, ATTIC LIGHTS still hold tightly to their core values of love and imagination.

Who could argue as you place the needle in the groove and hear those opening notes of “Never By Myself”? This song was the advance Single for the album and has it’s own peculiar story behind it. It was written by Colin when he got lost and left behind after a concert in Inverness (Scotland). The band were so tired that night that no one realized Colin wasn’t in the tour bus and they left for the next city. Colin’s phone was out of battery and he spent the whole night wandering around the town, ultimately sleeping on a bench by Loch Ness. The next day, he caught a bus to meet up with his band mates in the next town on the tour, and on the way he wrote this marvelous song that captures the spirit of THE HOLLIES and THE KINKS. If it was an unfortunate experience for Colin, he’ll be happy to know that it resulted in one of the band’s best ever songs. “Ruby’s Song” is the sound of BIG STAR covering the ROLLING STONES at their most elegantly riff-tastic. “Come Back To Me” takes us back to THE VELVET UNDERGROUND and the delicate, inspired guitar work of Sterling Morrison himself. On “People Come On” the band showcase their ability to work with psychedelic pop. Inspired in equal parts by THE SHINS and THE BEATLES (in the era of “Sgt. Pepper’s Lonely Hearts Club Band”), ATTIC LIGHTS have created an anthem for a new generation. It’s a song about the current state of the world, which tries to incite people to think for themselves and fight for a fairer, more honest society. “Fables” lets shadows into the room for the first time, evoking the wistful spirit of Elliot Smith and Simon & Garfunkel in a song that seduces the listener with the sheer bareness of the composition.

“Louis”, (along with “Ruby’s Song”) celebrates the birth of new babies in the heart of a group who are as close as brothers, with a verse that is just as hummable as the chorus. A couple doses of THE LEMONHEADS to fight the pain, a few TEENAGE FANCLUB vitamins, and you get the essence of the best that Scottish pop has to offer – no kind of malady can stand up to that. A country inspiration shines through on “I Found A Girl”, where we are reminded of Gram Parsons and THE FLYING BURRITO BROTHERS. You already know what that means - harmonies verging on the heavenly. “Palace Of Losers” throws out one of the more bitter messages on the album, with another raw, bare bones song with fascinating lyrics and a loping melody. A lesson in how to make sadness beautiful. It’s the song Will Oldham or Bill Callahan wish they had written. “Kings Of Whatever” nods to the distortion, urgency and self-confidence of the PIXIES. The album closes with “Back Rub” which shows off a strong American influence again, this time melancholic, maybe more mature, more disarming, more serious, and more solid as a result. Like when Neil Young or Tom Waits sat down at the piano: you knew something important was about to happen.

In the end, it’s about a collection of absolutely solid songs. The kind that seem unassuming, but you can’t stop playing them, and soon you can’t get them out of your head and they wind up becoming a part of the soundtrack of your life. Because that’s the true essence of pop - those melodies that slip into our lives, and take on a value that is beyond estimatation. Like TEENAGE FANCLUB, VELVET CRUSH, THE POSIES, THE BOO RADLEYS, THE THREE O’CLOCK and so many more.

That’s what we hope happens with these new ATTIC LIGHTS songs, produced by Johnny Smillie (BELLE & SEBASTIAN, Edwyn Collins) and Andy Bush (THE TWILIGHT SAD) and wrapped in a Gorka Olmo's fantastic design, with his magic and luminous illustrations. To a world with fewer sharks! At least out of the water.