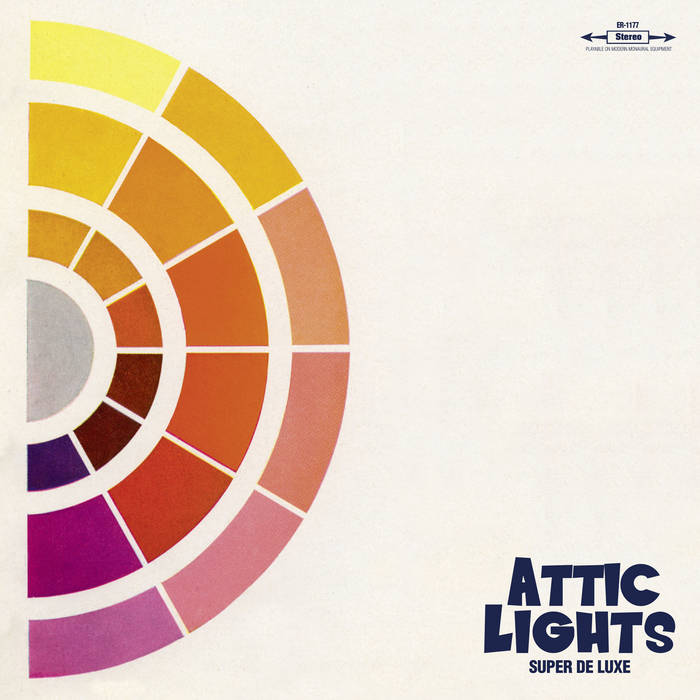 BD The album is full of happy vibes and singalong choruses - the perfect pick-me-up even when you don't need one! Favorite track: Say You Love Me.

We already told you the news when we put out the “Say You Love Me” single – the Scottish group ATTIC LIGHTS has a new album! After making themselves the best news to happen to pop music in recent years, now they’re releasing their second full-length album, “Super De Luxe,” on Elefant Records. Francis Macdonald (TEENAGE FANCLUB, NICE MAN) worked as a producer on the album, as did John McLaughlin, who has also produced groups like ECHO & THE BUNNYMEN and has worked with artists ranging from GLASSVEGAS to the very Lamont Dozier. Jim Lang also collaborated on the production work for the album and he made himself a fully entitled member of the group, led by Kev Sherry and Colin McArdle. And here we have it, with the same name as the jukebox that Tim Davidson, the group’s guitarist, has in his apartment. The jukebox has come to mean a lot to the group, a physical representation of nice, relaxing moments after the intense writing and recording sessions that went into the making of this incredible new album. It’s an energy boost, full of powerful guitars that push the limits with the vitality and the bright, luminous melodies that come from growing up in Glasgow.

“Say You Love Me” is the album’s opening track and is solid proof of all of the previously mentioned qualities. It opens the gates to the flood of potential singles the tremendously entertaining and easy-to-listen-to album is packed full of. Unleashed and epic, but with a delicious 50’s touch in the main melody, it describes the thin line between love and hate, and how one simple gesture can push us from one extreme to the other. It sounds like something that was absorbed from the inspiration of CAMERA OBSCURA who, by the way, along with MOGWAI, had remixed “Bring You Down” on one of ATTIC LIGHTS first singles, giving it that inimitable touch of the Scottish scene we mentioned earlier). “Future Bound” plays with funk and soul to ultimately unleash a melody that’s somewhere between THE BEACH BOYS’ harmonic fantasy and THE LEMONHEADS’ addictive pop. You can’t resist singing along every time with the chorus of the song, and it’s not the only song on the album that’s going to happen with. “Breathe For Me,” which is also available on the advance single, has emotions running high and choruses working as turning points in the song. The appearances and disappearances of guitars that would make Ken Stringfellow himself fall in love and that could appease Alex Chilton’s spirit, are ultimately those final straws that push us over the edge of intense emotions. “Stay Before You Leave” gives us another touch of bouncy, effective soul-pop, with vocal acrobatics that would be the envy of Canada’s SLOAN, while “Mona Lisa” joins the club of unforgettable choruses and sets off alarms for all fans of THE CARS and REDD KROSS.

“Don’t You” goes back to the most ferocious guitars, but without letting go of those harmonies that have occasionally linked the group to TEENAGE FANCLUB and FOUNTAINS OF WAYNE, and that have provoked such warm and positive reviews in magazines as prestigious as Mojo, Uncut, Q, NME, and The Guardian. “Hit And Miss” is incredible, balanced in between the best moments of Nick Lowe at his freshest and THE BOO RADLEYS. It’s a hit that shines with voices that fly to great heights, with the sixties spirit that pushes THE SMALL FACES’ most brilliant compositions. Playing with the title, we can say that this song is all hit and absolutely no miss. “Lock Me Out” is the only slow song on the whole album, a sweet and melancholic sigh that reminds us of TRAVIS – a group that, by the way, ATTIC LIGHTS have shared a stage with several times – dressed for the ball, with elegant and reverb-ed guitars. “Orbison”, a special homage to Roy Orbison, puts us back on the wake of the best power pop, somewhere between a burning Elvis Costello and a red hot THE RASPBERRIES, and pushes our euphoria up to unknown levels. “Gabrielle” closes the album with a touch of THE BEATLES, proving the Scottish band’s ability to sound tremendously contemporary and also show their love for Paul McCartney, while knowing how to wisely assimilate their diverse influences into their arrangements, vocals, and melodies.

This is definitely a major album, with high emotional voltage. It’s one of those albums that lets you believe in the power of music again. This is big news for the Scottish group’s fans, who, after four years of waiting, finally get some new songs. And what amazing songs they are. This is an album that we at Elefant Records are really proud of.